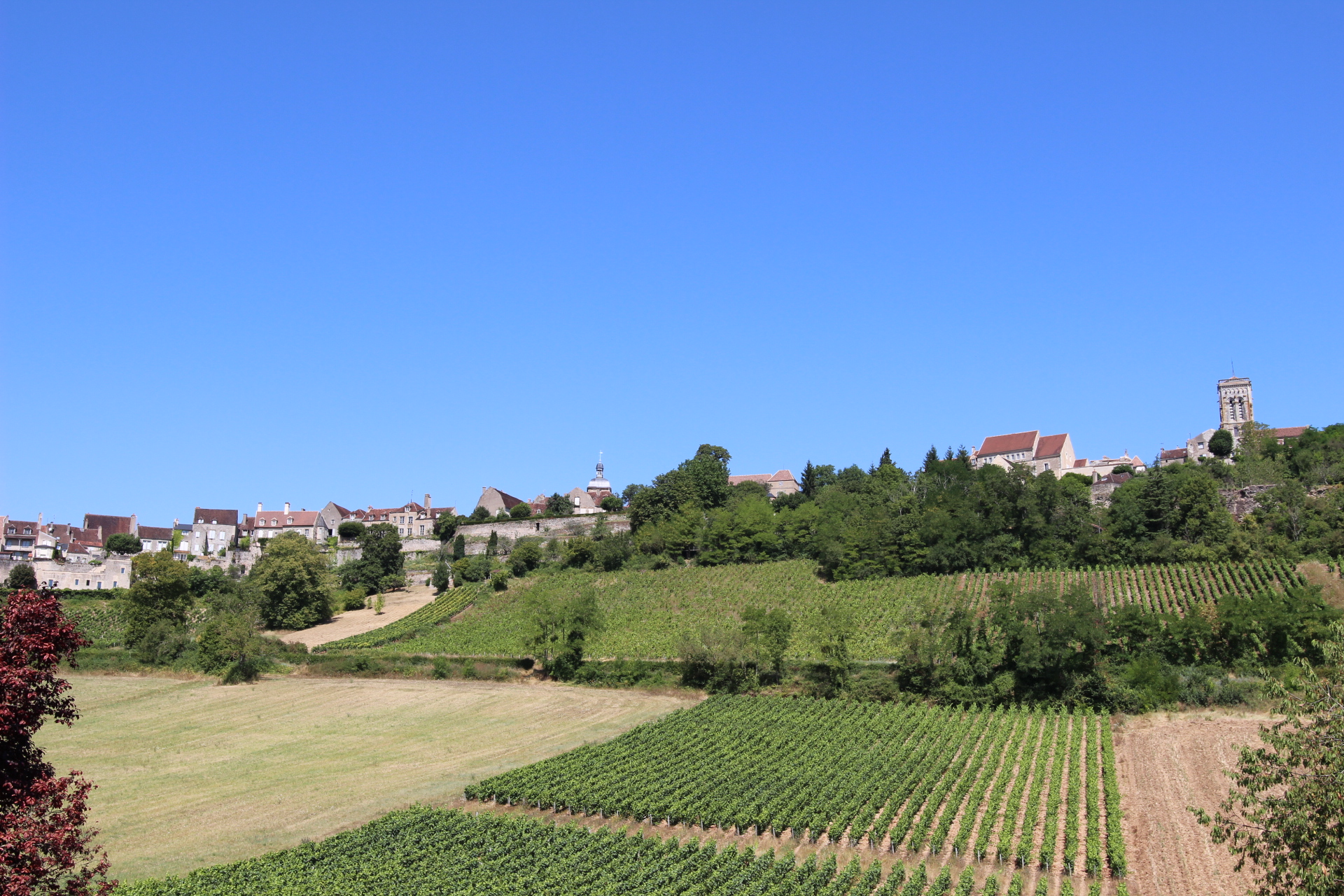 The Vézelay wine growing district consists of roughly 500 acres (80% chardonnay) and is worked today by some 25 estates. Tiny compared to other appellations and especially since it's known that during Gallo-Roman times vineyards covered over 3000 acres! In the Middle Ages Vézelay was an important site for pilgrims and also a strategic one due to its proximity to Paris. Furthermore, the proximity of the river Cure which runs into the Yonne river and then the Seine, meant that thirsty Parisians workers could be easily supplied with wine. Then came along the phylloxera crisis which wiped out the vineyards and it wasn't until the 1970s that,little by little, the vines were replanted.

Once the vineyards had been restablished the wine growers could begin exploiting it better by producing quality wines from the clay-limestone soils. The clay tends to give the fruitiness and roundness, and the limestone brings the freshness and minerality which is reminicent of nearby Chablis. The wines tend towards being quite "tense" and then increase in complexity with age. The cooler growing conditions, with an altitude of around 300m and the proximity of the Morvan hills, also lend wines more mineral characteristics. Some wine growers raise their wines in oak barrels often producing wines with subtle aromas of brioche or vanilla.

Vézelay wines are also popular abroad with around 20% of the production destined for the export market, although the domestic market remains very important especially given the number of visitors to the region.

The young and dynamic Vézelay appellation also takes into consideration respect for the environment as approximately a third of the estates are organically certified. The others maintain a more conventional approach whilst employing more environmentally respectful agricultural practices, thus reducing the need for chemical treatments.

The white wines of Vézelay have enjoyed remarkably fast success. In 1985, barely 10 years after the rebirth of the vineyards they were integrated into the AOC Burgundy appellation and then in 1998 their singularity and quality were recognised by receiving the specific regional designation "Bourgogne-Vézelay".

If the chardonnay accounts for 80% of the production, the remainder is dedicated to two other varietals; the pinot noir and the Melon de Bourgogne. The latter is more commonly known as the Muscadet and today there are only 7 or 8 acres planted with the varietal. The Pinot Noirs are labelled AOC Bourgogne rouge.

Vézelay in the spotlight

As another acknowledgement for all the efforts made, Vézelay has been chosen to host the 2019 Saint Vincent wine festival, one of the most important public events in all the region!

2016 and 2017 were heavily affected by frosts and consequently the Vézelay vineyards had the lowest yields in all Burgundy. The usual volume is somewhere around 5 500 litre from 1ha (2.4 acres) and both years saw figures closer to 1 800 litres per hectare! It was no surprise that the economic situation for the Vézelay wine growers became extremly precarious. Then along came glorious 2018, early everything and still harmonious well-balanced wines. With the excessive heat everyone feared low acidity levels and so the excellent final result came as a most welcome surprise. A fabulous harvest in terms of volume and quality. A great vintage for both the reds and whites alike.