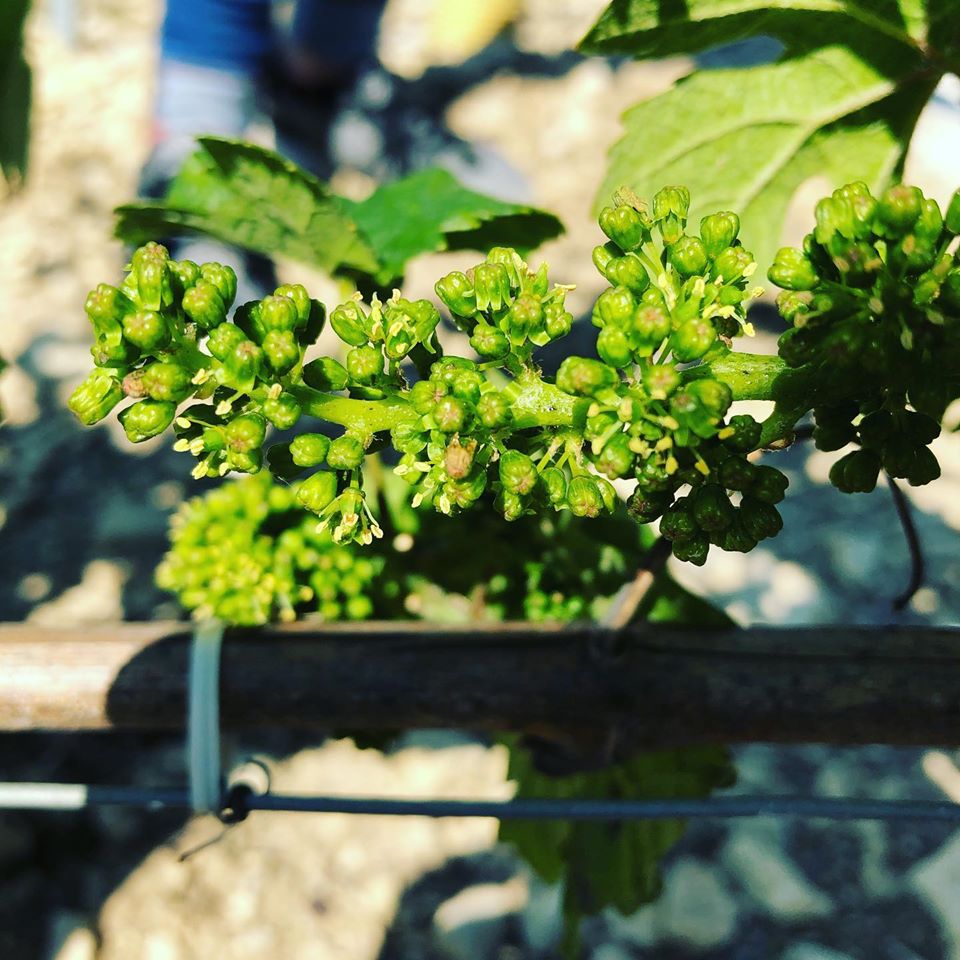 After spring’s initial bud break, vines grow rapidly – often growing up to a couple of centimeters per day – and their leafy tendrils expand wildly. About a month after this rapid leaf growth and two to three months after initial bud break, flowering begins underneath the mass of the vine’s leaves. Flowering begins with the development of tiny green spheres knownas a “calyptras.” Called caps for short, these tiny green balls encircle the delicate, pollen-carrying parts of the flower. When the vine is ready, the caps bursts open to reveal the basics of a flower: a pistil and several pollen-carrying stamen. Over a few weeks, pollen from the stamen transferred to the pistil, and little by little each flower is pollinated. Once pollinated, each flowergives way to a tiny, hard green berry the size of a small pea. Each green pea eventually ripens into the grapes. Flowering is followed by a succession of events—fruit set, berry growth and fruitmaturation—that culminate in the harvest. According to traditionalwinegrowing custom, the harvest follows one hundred days afterflowering.

Some factors that may contribute to poor flower development

Vine nutrition : Research indicates that vine nutrition has an impact on bud fruitfulness developed during the previous growing season as well as floral differentiation in the current season prior to bloom. Micronutrient defficiency can result in poor fruit set as it plays a role in early season shoot growth and pollen tube generation which is required for fertilization. Water stress prior to bloom has also been associated with poor fruit set,and this can be related to the lack of shoot growth and nutrient uptake prior to bloom.

Vine vigour : In overly vigorous vines, shoot tips can out-compete clusters for resources pre-bloom and can lead to reduced flower development and poor fruit set. Conversely, a weak vine will have fewer resources in stored carbon and nitrogen, leading to weak growth. The weak vine shoots will pull resources from the flowers leading to poor fruit set. Therefore, it is best to achieve good fruit set by managing vines for vine balance between vegetative and reproductive growth. The goal is a moderately vigorous vine, not a weak or overly-vigorous vine.

Weather conditions : Grapevines are self-pollinating, which means that they don’t require insects for the process, however this makes them weather-dependant for success. Too much wind, or particularly rain, can physically inhibit pollination and fertilization by dilution of the stigmatic surface which is to receive pollen from the flower’s anthers. The consequences are loose, open bunches with very few grapes, and low yields for the season. Furthermore, if the weather is cold during flowering it can extend the process out over two to three weeks,meaning that within a bunch there could be grapes with 10 to 14 days’ difference in development time, which results in difficulty in making the right picking decisions at harvest time.

Other : Anything that is drastically damaging to the vine’s canopy can lead to problems with poor fruit set. These events may include early fall frost, winter damage, hail, or other methods of vine defoliation (herbicide, insect feeding, etc). During fall, the vine is redirecting nutrients from its leaves to store a sreserves in the trunk and roots. If a severe fall frost is experienced well before leaf-fall, there can be a significant disruption of this nutrient storage that will leave the vine in a weaker state the following spring. Similarly, any event that can significantly defoliate a vine late in the growing season or in early spring can lead to poor flower development and reduced fruit set by way of reduced carbon assimilation and storage.

Summary : Flowering is extremely important from a pragmatic perspective since it will determine nothing less than the size of the harvest.