From wood to stainless. Changes in the cellars of Chablis 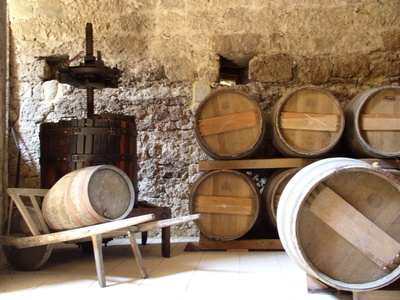 Today, after the grapes have been harvested the majority of Chablis wine producers ferment and age their wines in stainless steel vats and no longer in oak barrels. However, from the Middle Ages right up to the 1950's the vinification took place "à la feuillette", that's to say in small 132 litre oak barrels. As a legacy of this past, wine brokers in Chablis still display on contracts the price per "feuillette" and not per litre!

From the 50's on, the producers began to use the larger 228 litre Burgundian barrels known as as "pièce", quite simply because they cost proportionally less.

The years 1970-80 then saw the stainless steel vats becoming increasingly popular and practically all wine makers are equipped with them today. The main reasons behind the move are relatively easy to understand; they are less costly and much less labour intensive since the manipulation of 100's of barrels is very long and tiring!

Today there are definately 2 distinct schools of thought regarding the use of oak in the cellars of Chablis. Wood can be used excessively and the vintner then runs the risk of making the wine "heavier", thus masking the characteristic minerality and freshness that make great Chablis so special, On the other hand, when used sparingly it can bring a certain depth and compexity to the wine. In fact, several factors enable the influence of the oak to be controlled; the duration in the barrel, the percentage of a given wine that is aged in wood, and the quality and age of the oak barrels themselves. Proponents of this approach aim for the the oak "to melt" into the background never dominating the quintessential characteristics of the wine.

Regardless of the approach adopted by the wine maker, it has to be admitted that careful oak aging does bring to Chablis wines enticing notes of vanilla and toast which rarely leave the wine amateur indifferent!