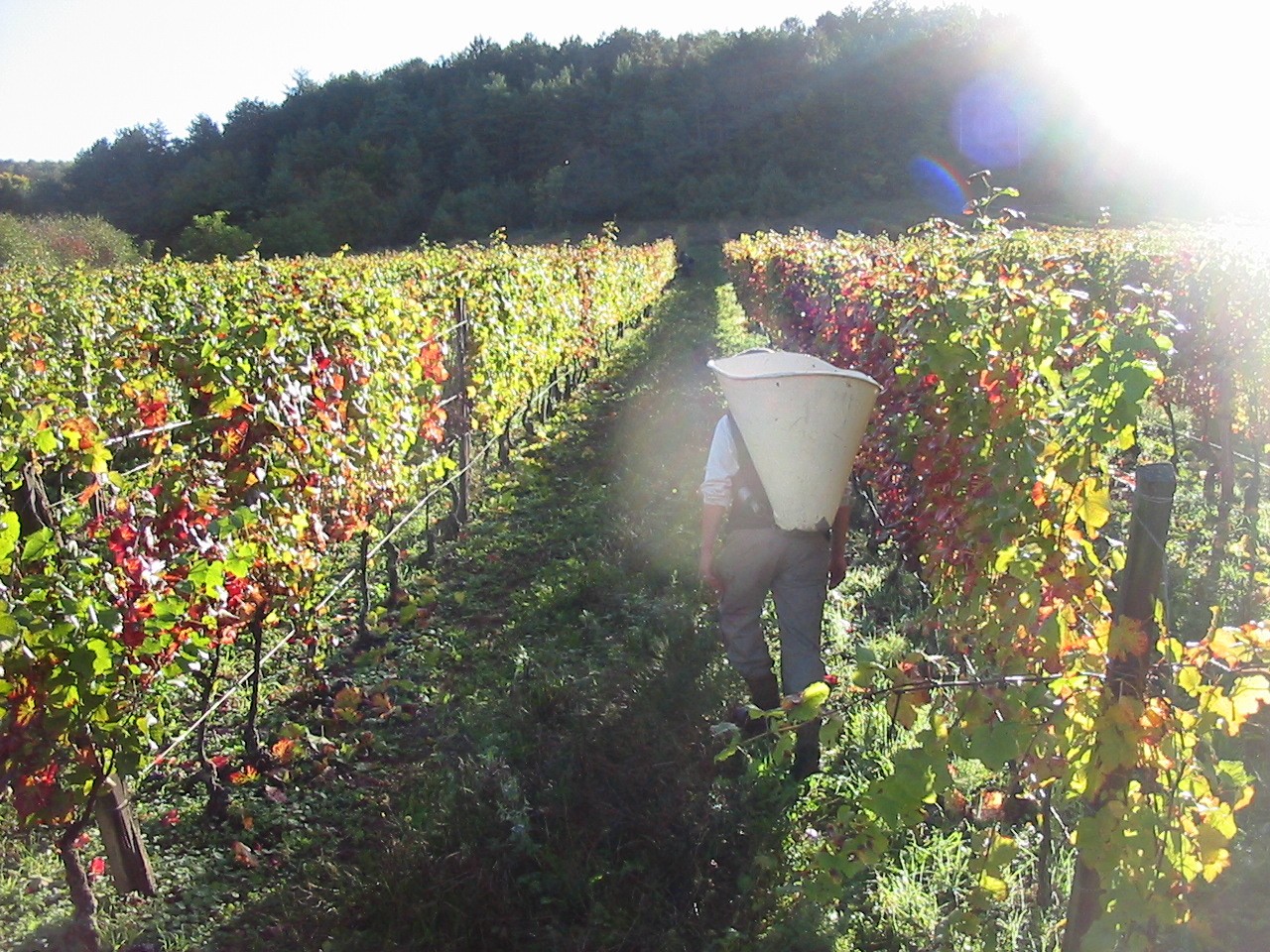 After fearing Spring frosts and waiting for a drop or two of desperately needed Summer rain, those in the wine profession here are unanimous in their verdict : 2018 will be a fabulous vintage! The industry suffered greatly in 2016 and 2017 from Spring frosts and hail storms so it goes without saying that a year like this one, with there is both quality and quantity, comes as an enormous relief. The harvest here began on August 22nd for the sparkling wines and September 3rd for the others. Now that the precious grapes are all safely in the vatting rooms, here is a brief district by district summary of the 2018 northern Burgundy harvest.

Chablis - the vast majority of estates finished harvesting last week. Adrain Michaut, Chablis producer from the village of Beine said " Thanks to a long hot Summer we have an exceptional vintage, possibly a bit low in acidity at times but great sugar levels which will give around 13%. As for the quantity, it is between 70 & 80hl /ha ( 1 hl = 100 litres 1ha = 2.4 acres) which means we are back to a full harvest potential and everybody is in a position to build stocks back up. As a matter of fact, we have renewed the request to increase the VCI (complimentary volume request) after receiving an initial refusal".

Irancy - the President of the Irancy wine growers association considers "2018 is the vintage of the century, even if we are still at the beginning of it! The older generation of wine growers have never seen anything like it in terms of both quality and quality, as well as sugar levels. The yields are extraordinary given the drought conditions and high temperatures of the Summer. Furthermore, the grapes have kept their freshness as the acidity levels are good. In 2003 there were high sugar levels but low acidity. Nobody can really explain why, although slight rainfall on August 29th appears to have sufficiently boosted acidity. Also the subsoil had stored a lot of water in May and over the Winter. Nevertheless, one should remain prudent because the temperature of the grapes during harvesting was quite warm and fermentation began much faster than expected. What's more, the higher the alcohol level the lazier the yeasts become towards the end of fermentation. In any case, we have something to make some excellent vats of wine with!"

The Auxerrois - "There isn't one village which isn't rejoicing". In Coulanges-la-Vineuse, Odile Maltoff, President of the wine growers syndicate qualifies the vintage as "rich, with excellent volumes; however with the high sugar levels the vinification won't be easy to control. But frankly, we havn't seen such a harvest for a longtime!" At the Clos de la Chaînette, wine grower Thierry Millière was satisfied and exclaimed "we harvested at 2 different times and the volumes are excellent. We did the right thing by getting rid of bunches of grapes during the Summer so that we were able to gain in sugar concentration".

The Vézelien - the last bunches of grapes were due to be harvested late last week "It's the vintage of the century!" exclaimed Mathieu Woillez, President of the Vézelay wine growers association. "Quite amazing, both for the quantities harvested which were higher than expected and which does a lot of good after 2 years of frost damage, as for for the acidity levels which were expected to be lower but in fact are quite correct. Therefore there is a lovely balance between acidity and sugar levels."

The Tonnerrois - "Never been seen before: quality and quantity : everything is perfect " enthused local wine grower Raphael Masson from Serrigny. "Even the bunches harvested a bit later had good acidity. And we have superb colour and great sugar levels!"

The Jovinien - Alain Vignot, President of the wine growers association was equally enthusiastic "We can't dream for better! No rot at all with a yield of around 60hl/ha and perfect maturity. We havn't experienced this since 1976, and volumes are even higher this year. We had plenty of water in the Spring and several showers beginning July. We'll sign up straight away for the same next year!"